It is nearly impossible to be downtown Chicago without seeing a sculpture on a corner, tucked into a plaza and defining a park.

Chicago has a good bus system and taxis are within waving distance. But the “city that works” is also the city that walks. This is a five part series of walks to see art, architecture, theater, go shopping and try different restaurants for different times of day. Even better than doing one walk, is to combine a few destinations for a full, fun, vacation day in the city.

First in the series: ART

It is nearly impossible to be downtown Chicago without seeing a sculpture on a corner, tucked into a plaza and defining a park. And that is just outside public art. Peer through the glass of office buildings to see their lobby sculptures.

Inside or out, they are on or near east-west streets that when followed come within a couple of blocks of the Art Institute of Chicago at Michigan Avenue.

You really need a whole day to do the Art Institute of Chicago, a double building that showcases older, traditional art in the main section that fronts Michigan Avenue at Adams Street and contemporary pieces in newer, Modern Wing facing Monroe Drive and Millennium Park.

So let’s look at what is within walking distance of the Art Institute. You do have on comfortable shoes, right?

But this is a good place to sit and contemplate, Henry Moore’s “Large Interior Form,” Alexander Calder’s “Flying Dragon” David Smith’s “Cubi VII” and Ulrich Ruckriem’s “Untitled” sculptures. You can drop references to this almost secret garden when talking about hidden Chicago gems you found. 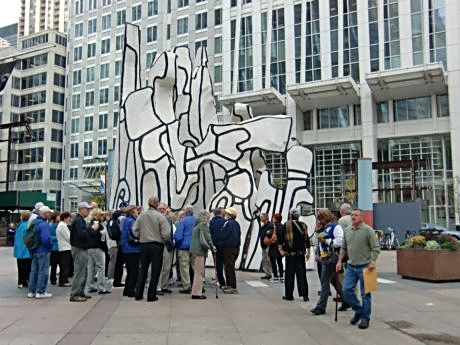 Not so hidden are the pieces across Monroe in Millennium Park. They are definitely worth seeing and snapping with your phone or camera.

Now, look around and ponder when does an architectural structure get mistaken for a giant sculpture? When it is the billowing steel ribbons atop the Jay Pritzker Pavilion in Millennium Park that was designed by architect Frank Gehry.

Another, larger-than-life Millennium sculpture, is the two-piece, 50 foot high, Crown Fountain designed by Jaume Plensa. Made of glass blocks that face each other with a walk-in catch basin between them, the blocks reflect the faces of hundreds of Chicago residents.

If you want to do a broad arc, you can go west from Millennium Park on Randolph to see Jean Dubuffet’s “Monument with Standing Beast” at the State of Illinois’ James R. Thompson Center (100 W. Randolph Street).

Then head south a block to Washington Street for “The Picasso” at Daley Plaza. It has that title by default because Pablo Picasso supposedly didn’t name it.

Look for Joan Miro’s “Chicago” sculpture in concrete, mesh, bronze and tile on the narrow Brunswick Plaza across Washington Street.

The next block south is Adams Street where you’ll see Calder’s bright “Flamingo.”

Adams ends east back at the Art Institute. You’ve made a loop but you might want to walk into Grant Park on the museum’s south side to see dozens of other walkers.

Or, from a distance, its appears they are people walking. They make up “Agora,” a group of headless, cast iron figures by Polish sculptor Magdalena Abakanowicz. No one will believe you unless you take a picture.

Watch for the Restaurant series for ideas of places to stop while walking downtown Chicago.