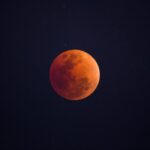 While politicians are busy making last minute pitches on US Election Day Nov. 8, 2022 to influence the course of history, our astrological world is busy following its own course.

November’s full moon, called the Beaver Moon because that creature is about ready to shelter in the lodge it created and stored with food for the winter, will appear full and bright the night of Nov. 7. But, it reaches full bright illumination early the following morning at 6:02 a.m. EST Nov. 8 and will still look full Nov. 9.

That is, it will appear white and bright, except when it turns a coppery red as it hides very early in the morning of Nov. 8 during a full lunar eclipse.  Then, it is called a “Blood Moon.”

NASA’s Scientific Visualization Studio has an excellent photo, explanation and times of the eclipse’s stages.

To see the eclipse in the Chicago area you would have to be up very early Nov. 8. The Penumbral stage begins at 2:02 a.m., moves to the Partial Eclipse stage at 3:09 a.m. goes into Full Eclipse at 4:16 a.m. and is at Maximum eclipse stage at 4:59 a.m. Tuesday morning.

During the eclipse stages the Earth is in the middle between the Moon and Sun so that the Earth casts a shadow on the Moon.

How dark it is where you are depends on whether your area or state turned back the clock on Nov. 6 to end Daylight Savings Time. How much of the eclipse and its timing is in the different areas of the world is diagramed in Time and Date, a good astrological resource.

This total lunar eclipse will be visible from most of North America, reaching its maximum at approximately 6 a.m. Eastern Time on Tuesday, November 8. The Moon will be close to setting then so look at the western horizon.